In Arizona, homeland of the Apaches, Porico, the son of Geronimo, sole survivor of a massacre by soldiers, whose tribe is hungry and dissatisfied with white policy wages a war of vengeance on white men. Unscrupulous lawyer Rankin schemes to split the take with the Indians and start a chain of stores that sell goods left over from Indian raids. Brave ex-cavalryman Jim Scott and his old pal Tulsa do everything in their power to stop both the scavenging crooks and vengeful Indians and make peace. A rarely-seen and very violent serial Clayton Moore shot while on hiatus from playing the Lone Ranger on TV.

Transferred from a 16mm original print with nice exposure and sharpness. 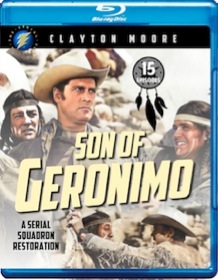 PREORDER LINK
SON OF GERONIMO BLU-RAY
This project is being rescheduled and will ship when fully restored and proofed.
You may still preorder if you wish still, as a single purchase for scheduled release in September.