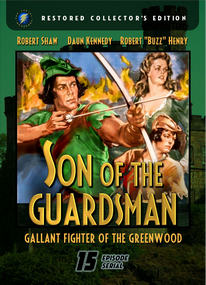 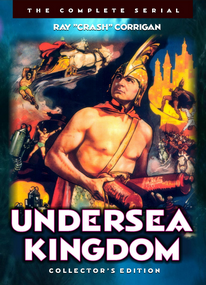 A mini-documentary
"The Origin of Rocketman"

An interview with mega-collector Bob Burns, owner of the Rocketman costume.

This collection is is set up with 7 consecutive illustrated menus of 6 files each you can click through to locate the chapter or serial you want to see and will play all files through continuously.

Jeff King of the Science Associates and his newly-invented atomic-powered rocket pack flies to fight the minions of the murderous Dr. Vulcan, a disguised rogue scientist.

Jeff King of the Science Associates and his newly-invented atomic-powered rocket pack flies to fight the minions of the murderous Dr. Vulcan, a disguised rogue scientist.

Larry Martin now wears the Rocket Suit and tries to stop Marex, a Martian, from collecting material he needs to replace Earth with Mars in the sun's orbit. His creepy henchmen include Leonard Nimoy in a very early screen role.

Includes the original theatrical trailer and an interview with Hollywood mega-collector and classic film Bob Burns on Sci-fi cliffhangers.

Commando Cody, inheritor of the rocket pack, and friends travel to the Moon to battle Retik, ruler of the Moon people, who wants to invade Earth and plunder its resources.

We are often asked where to purchase the Flash Gordon serials.

This is the official Hearst release of the three Flash Gordon serials. With the red-bordered cover and booklet inside. Look for it on eBay.

Virtually all other editions except the Image DVD set which preceded it and presents the same transfers is a ripped-off 2nd generation copy of this version.

It sells from between $35 and $125 depending on whether the seller has noticed Amazon wants $125 for it. Look on eBay or other second-hand seller sites first.

An archive of lost and forgotten Flash Gordon-related content from the past. Includes:

The "lost" Flash Gordon Feature
FLASH GORDON: THE GREATEST ADVENTURE OF ALL (1979)

An apparently now-lost animated feature produced in 1979, aired in 1982 then apparently lost after a Bulgarian VHS and Japanese Laserdisc releases. Subtitle-free presentation.

When a radio performer discovers a strange underground city ruled by Queen Tika, who wishes to keep her kingdom secret from the “surface people” she despises, his two bumbling friends, young Frankie and Betsy and the Thunder Riders Club ride “to the rescue.”

Influenced: Star Wars, The Phantom Menace, The Empire Strikes Back


When a radio performer discovers a strange underground city ruled by Queen Tika, who wishes to keep her kingdom secret from the “surface people” she despises, his two bumbling friends, and young Frankie and Betsy and the Thunder Riders Club ride “to the rescue.”

Influenced: Star Wars, The Phantom Menace, The Empire Strikes Back

SON OF THE GUARDSMAN
THE MOVIE SERIAL
Blu-Ray / DL-DVD

"This is the first of the arrows of vengeance which shall find their marks in the oppressors of freedom."

In medieval England, Young Roger Mowbray, when his grandparents are robbed and burned to death in cold blood by Sir Edgar Bullard's soldiers, is taken in by a group of "free" forest outlaws led by Alan Hawk and Red Robert who are committed to combatting Bullard's oppression, and fights alongside them in battles against the soldiers with his sling as they attack with bows and arrows.

David Trent, who lives in Bullard's castle with his uncle, begins to discover the cruelty with which Bullard treats his subjects and, when he is threatened with execution for aiding one of the outlaws who knows information about the murder of his father, a royal Guardsman and friend to the King, turns against Bullard and also joins the outlaws and helps rival Lord Markham build a force against his uncle.

ORDER THE
SON OF THE GUARDSMAN DL-DVD
Dual-Layer DVD with all 15 episodes in standard 4x3 raio, 720x480.

ORDER THE
SON OF THE GUARDSMAN H-Blu-Ray
This disk is recorded at 960 pixels wide low level HD, standard 4x3 ratio. Playback on one of the Sony models mentioned on the Hybrid Blu-Rays page is recommended.


Naval officer Crash Corrigan travels to the bottom of the sea in Professor Norton's mini-submarine to investigate emanations from the ocean floor. Sucked into a strange world, he and his party discover that the disturbances come from the divided kingdom of Atlantis, where dictator Unga Khan is bent upon raising his super tower to the earth's surface, to conquer or destroy the upper world. 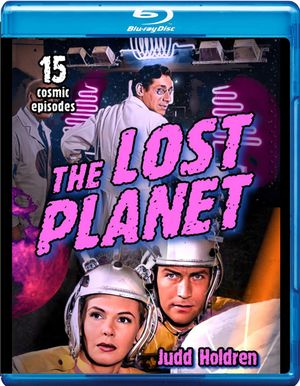 Crazed scientist Dr. Grood kidnaps Professor Dorn for assistance in his bid to conquer the universe with futuristic weaponry and Rex Barrow doggedly pursues him to planet Ergro, where Grood enslaves others to mine valuable cosmonium.

Available on Blu-Ray or DVD