EXOTIC ADVENTURE SERIALS
The Squadron offers the only edition of the splendidly-produced and directed
DRUMS OF FU MANCHU, digitally mastered from an original print.

The Squadron editions of THE TIGER WOMAN and PERILS OF NYOKA
include restored original titles. All three titles have excellent picture and sound
quality and are highly recommended. 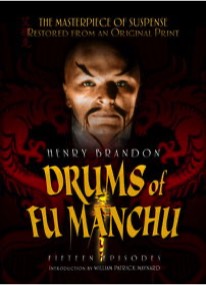 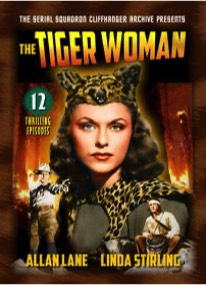 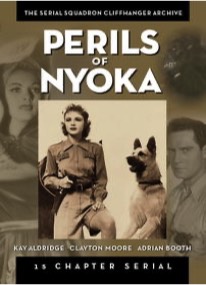 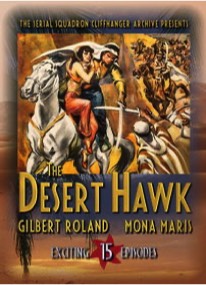 A dacoit knife that nearly misses British investigator Nayland Smith's head tips him off that megalomaniac Fu Manchu and his evil Si Fan society are in California. Fu desires a scroll which will lead him to the tomb of Genghis Khan (whose sacred scepter will, he says, help him conquer Asia), and kidnaps Dr. Parker, a scientist who knows its location. The scientist's son and Dr. Petrie go in search of him, and Fu Manchu leaves no stone unturned as he terrorizes and destroys his enemies with poison darts, booby traps, assassins, ancient torture devices, and unseen, ominous drums which are a warning of impending doom.

In the land of Ajad, Hassan, the jealous and treacherous twin of rightful, good caliph Kasim targets his brother for murder and assumes his identity. Unknown to Hassan, Kasim survives his scheming brother's midnight coup and assumes the identity of a legendary outlaw called "the Hawk." Kasim and his loyal allies must battle Hassan's treasonous assassins and the dangerous Brothers of the Sword in order to help the rightful ruler win the love of beautiful princess Azala and work his way back to the throne.

An action-packed and entertaining exotic adventure story with lavish sets and an engaging plot, featuring a good cast including a solid leading man in a dual role and many familiar supporting classic serial actors. One of a few costume epic serials of the 1940s that tried something different.

"I just finished watching Desert Hawk and the picture quality was great. Thank you for all of the effort that you devote to saving these old films. My children and grandchildren do not understand  the culture of Americans who would devote hours watching these titles every week."
-- Squadron supporter Harry D.

This title is now available on Blu-Ray


Adventurers Nyoka Gordon and her friend Larry Grayson search for the golden tablets of Hippocrates, which contain a cure for cancer. Arabian queen Vultura, who masquerades as an earthly incarnation of a pagan Sun Goddess, also wants the tablets and the treasure associated with them and with her lieutenant Cassib and Count Torrini, as well as her bodyguard, an ape named Satan, travels across the desert in her chariot to try to obtain them. An action-packed classic with more torturous deathtraps than possibly any other serial ever made. 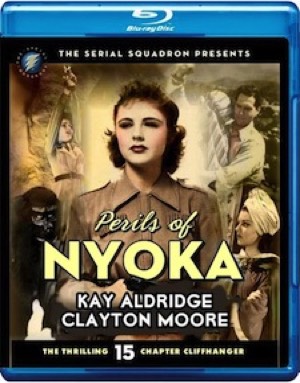 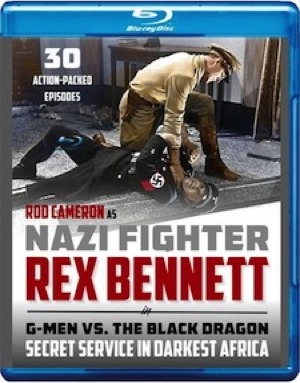 The complete serials
SECRET SERVICE IN DARKEST AFRICA and
G-MEN VS. THE BLACK DRAGON
Both on the same Blu-Ray disk
An inexhaustible one-man army takes on Nazis in Africa and Japanese spies in two wildly action-packed serials.

In Casablanca, North Africa, US secret agent Rex Bennett is pitted against Nazis who infiltrate Sultan About Ben Ali's palace and replace him with impostor Baron von Rommler. With support from his friends Capt. Pierre la Salle of the French resistance and agent Janet Blake, Bennett takes on what seems like all the Nazis and munitions dumps in Africa to try and defeat the Axis spies and rescue the Sultan. Stunning fight choreography and double-danger-level cliffhangers highlight this thrill-a-minute Republic serial made at the studio's peak, which is jam-packed with blazing, explosive action.

The beautiful but dangerous ruler of a Central American jungle tribe fiercely defends her people against crooked operators who want to gain access to her land's oil reserves, with the help of intrepid troubleshooter Allen Saunders. Plenty of action, some of which inspired scenes in Indiana Jones films.

This title is now available on Blu-Ray

Contains both full serials, THE TIGER WOMAN and ZORRO'S BLACK WHIP, with original trailers, featuring the fan-favorite heroine, on one BR disk.

Upgrade to Blu-Ray for smoother motion and sharper picture.

Secret agent Rod Stanton of the the United Peace Foundation and the resourceful Tal Shanto investigate problems in a lost city in the Himalayan nation of Pendrang, where Sir Eric Hazarias and his associates plot a future world war. When Rod and Tal Shan stumble upon segments of a hieroglyphic tablet, Hazarias uses their discovery to locate a store of Meteorium 245, which he needs to complete an atomic defense system.